If you ever get the chance to go to Quebec City in the summer, you should go! There are so many things going on! Of course, if you want peace and quiet, I would not recommend the Port of Quebec marina but it is certainly right downtown and in the hub of everything. It is hard to believe that in two days, we will be back at home surrounded by trees, rocks and water – no people. I think I will enjoy the quiet but this has definitely been fun!
So, last night we could have gone to the marina karoke from 5 to 7 – don’t worry! We didn’t go but it sounded interesting, especially when someone was singing the Love Boat song – yikes!
We also could have gone to the Fesitbiere – the beer festival. It is right across from the harbour as you can see in the picture below. 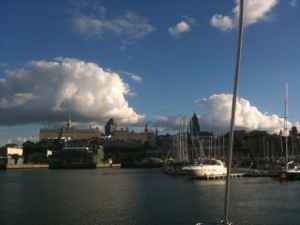 Or we could have gone to Cirque de Soleil which is in the parking lot where the boat will be stored for the winter. We are going there tomorrow night with Nick.
What we did do was row out into the marina’s harbour and watched the giant movie on the grain mill. The following picture was taken from the boat and it was taken to give you an idea of how massive the screen is – 600 metres wide by 30 metres high.

The next picture is of the mill lit up before the show – that was pretty cool already! The show though, was out of this world – an excellent way of presenting the history of Quebec. 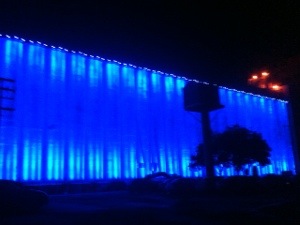 So, there is a lot to do here. We could have partaken in the Pride Parade today but instead, I dragged Dennis up the hill once again to see the Plains of Abraham. They haven’t changed since 1976 (the last time I saw them). We enjoyed walking on the Promenade and walking through the city.

We are just waiting for Nick to arrive. Tomorrow, we are packing the car and on Monday morning, we are leaving at the crack of dawn. It will be a quick ride home (as compared to the trip here!).

I mentioned that I would add more to the blog about Quebec City, so here is the latest news. First of all, I am afraid that I cannot recommend Marina Trois Rivieres to anyone who has a boat unless you need fuel which is why we stopped.
When you enter the marina channel, there is a yellow marker way over to the side, almost beside the channel marker and we were supposed to go to the right of it because of the “hump” in the channel. Dennis changed his mind at the last minute because it did not seem right and although we had only 5 feet of water under the keel, we made it.
Then, when we called on the radio, there was a huge language barrier and even though I repeated everything in French, the lady still could not understand me (I thought I was speaking well!). When we arrived at the fuel dock, we waited around and finally a boy came cycling down and filled the tank. After that we went to our assigned dock and enjoyed the view and smell of the pulp and paper mill. It was just like being back in Fort Frances!
Anyway, the next morning, we had to leave early and on the way out, we hit bottom right near the yellow marker. We kept going though and we will see in the spring if there was any damage done.

Our trip down the St. Lawrence was fine. We saw a very interesting boat. Here is a shot of it.

We had the current going with us (low tide) but the wind was against us so we weren’t sure if we would make Quebec City at the right time. Apparently, if you try to go during the high tide, the current is really strong because the water is rushing into the river and if you have winds coming from the wrong direction, you won’t make any progress at all. For us though, it all worked out and we made it into the basin. Then Dennis called the lockmaster and he opened the bridge for us and we tied up into the lock to get into the marina.

After a few calls to the marina, we were tied up! Finally, after seven weeks of travel, we made it all the way!

We have been wandering all over the city. It is very beautiful and we are glad that we came a day early. I went biking (the trails are awesome!) and when I stopped for a rest along the St. Lawrence, a whole bunch of steam came out of the vents below me. I am not sure why this happened – it wasn’t hot, just water vapour.

Dennis sorted out the boat – we are leaving it here for the winter so he had to talk to a variety of people and organize everything.

Here are some pictures of the city. 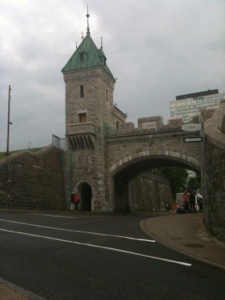 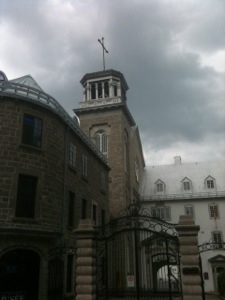 Tonight, we are going to see a film on the history of Quebec. I know that doesn’t sound exciting but it is going to be shown right on the flour mill behind the marina. Here is the website: http://lacaserne.net/index2.php/other_projects/

That is all the news for today!