We have officially left Lake Huron! We left at about 6:30 this morning to get to Sarnia. We had an excellent forecast and were actually able to sail the whole way (we had some help with the engine towards the end – otherwise we’d be over in the US somewhere). It sure makes a difference when you are going with the wind rather than going against it!
Just before we crossed under the bridge, a huge racing sailboat went past us – it was very impressive! 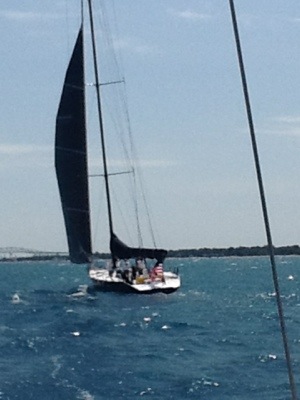 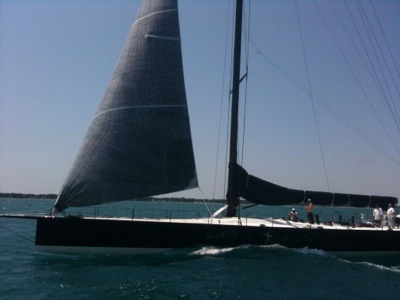 We crossed under the bridge at around 3:00. Here is a picture of it as we raced past. 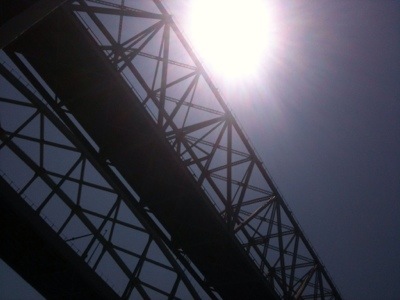 We headed down the St. Clair River to the Sarnia Bay Marina, called them on the radio (they actually answered) and proceeded to our slip. We both just about had heart attacks when the depth meter read 3 foot 6 (our boat has a a five foot keel). Dennis kept plowing through though and I held on tight in case of a sudden stop (there are no seatbelts available!). We made it in safely and realized that the weeds were causing the depth meter to read the such shallow depths.

It turned out that we are at a powerboat marina. Check out the picture of the lone mast: 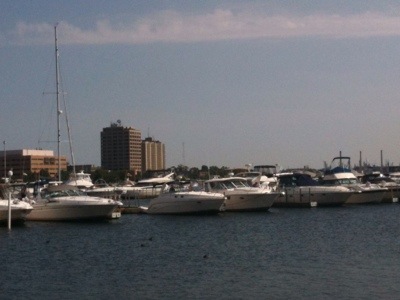 The marina is very urban – no more quaint little places anymore – we are city boaters now! It seems odd to be on the water surrounded by factories, apartment complexes, sirens, and lots of car traffic. We are very close to the Bluewater Bridge though and Sarnia is a big city.

We might anchor tomorrow night or we might keep going to Windsor. The St. Clair River won’t take long – there is quite a current! Reminds me of the Mississippi!

The final picture is of Dennis standing beside the Marina sign. The reason we took that picture is because of Jack Kennedy from Parry Sound (probably not the same guy but you never know!)
Anyway, we’re off tomorrow but we’re leaving at a respectable hour: 10:30 or so! 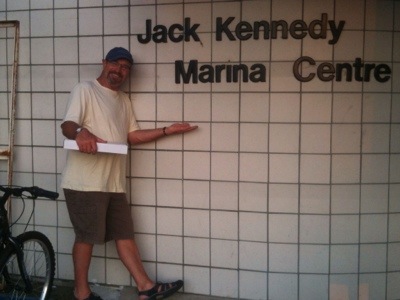