Just a note for those people traveling by boat to Baie Eternité – the guide books say that there are a dozen mooring balls but we could only see five at the most. It is difficult to anchor because of the depth and the tides. However, there weren’t too many people there, so it all worked out. Now, if you take your dinghy to the dock, do not listen to the park employees as to where to tie it up. Tie it up at the back of the dock.

We left at around noon – the wind was gusting quite a bit but because we were in the river, the waves did not build. Of course, now that the wind meter works, it was a bit frightening to see the wind speed hit 36 knots! It was fine though and we managed to get a few good pictures (several of the Virgin Mary) but also one of the cliff.

We actually sailed (without the motor!) down the river. We only saw a few belugas in a group but they were quite close to the boat. We arrived at the Tadoussac Marina without incident and asked for assistance to dock (it is much easier to ask than have me jump off the boat!). The dock man helped tie us up and then proceeded to measure the length of the boat and the dinghy so we are being charged for 44 feet instead of 42 : )

We wandered around the town and had supper. I practised my French and the waitress had a good laugh but I did end up with what I ordered!

Here are a couple of pictures of the harbour and of last night’s sunset. 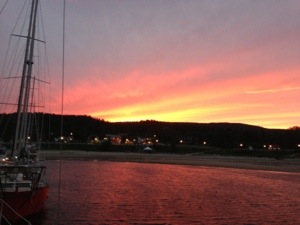 So, this morning, Dennis was up and about at 5:00 and heard a strange sound. It was a whale in the harbour, blowing and diving around. It was right near the boat! He got a picture of it but it looks like a black speck so I won’t upload it. That means that I have to get up super early tomorrow and whale watch!

We will check out the town some more today and probably leave for Rimouski tomorrow.

It was my bright idea to hike up the mountain to see the Virgin Mary statue. It was erected by Charles-Napoleon Robitaille, a Quebec City merchant travelling on the frozen Saguenay River. He fell through the ice and

“imploring the Virgin Mary for help, he finally managed to pull himself out of the water. Having become very sick as a result, he again pleaded with the Holy Virgin to let him live ten more years so that he could take care of his family. Wanting to give thanks to She who saved him twice, Robitaille decided to have a statue of the Virgin erected on Cape Trinité…The statue was shipped to L’Anse-Saint-Jean on a steamer but a handling error sent the statue overboard. Fortunately, it was made of white pine and it floated. It was then towed by rowboat to the foot of Cape Trinité, a 15 km trip. Originally made from three wood blocks, it had to be cut into 14 sections before it could be hauled to the top of the cape by hand; a job that took eight days to complete.”

I can imagine that the path the top of the cape in 1881 (that is when it was erected) was probably not as nice as it is now. We had stairs and rest stops along the way and yet we were very tired once we reached the top.

Here are a few pictures of the boat from the way up.

To prove that we made it all the way there, here are a couple of pictures of us. 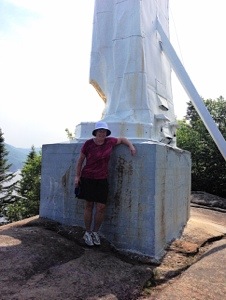 According to my Fitbit, the entire trek was 15000 steps or 10 km, so we were pretty tired when we got back. Of course, probably not as tired as the 100 or so people going up in the heat of the day! As we were coming down, we passed then and they kept asking how much further it was (they were still near the bottom). Anyway, if you do decide to do this hike, you should start early in the morning (we were the first and only ones on the trail).

We spent the afternoon swimming. It was so nice to cool off!

July 5th and 6th – The Saguenay

It was another early start yesterday (4:45 am) to Taddousac. Again, it was because of the tides. We wanted to be at the mouth of the Saguenay during slack tide (so that the water is not all rushing out, creating a riptide and rapids). There was a swell on the St. Lawrence, so the first hour was not great but as we moved up the coast, the swell lessened and we had a good ride.
We spotted a grey seal, more belugas and a whale of some sort (possibly a common whale) in the entrance to Taddousac. Pretty cool!
We went past Taddousac at 9:00 am and headed up the Saguenay. The cliffs are spectacular! It really is a fjord.
Again, we saw many belugas – diving for food. It you look at the second picture, you will see two white specks – those are belugas. We are not allowed to get too close to them.

It takes quite a while to get to Eternity Bay (hence the name?) but it is well worth the trip! The scenery is amazing! 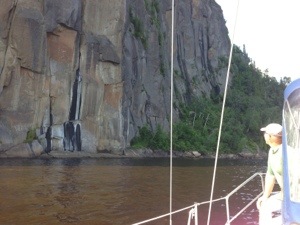 At the park, there are a few mooring balls (there used to be a dozen but now only 4) so we grabbed one and hooked on. Then we went swimming – the water was salty but a good temperature – 25 degrees, so it was good to cool off.
Today, we are staying put and will hike to the top of the cliff. We will be looking at a statue of the Virgin Mary, placed there in 1881.
More news later!