Dennis rowing back from the resuce

Much progress was made in the electronic department since the weekend before. The captain managed to fix almost everything – refrigerator, radar, and toilet. Unfortunately, the autohelm was still broken and the problem seemed to be rather complicated. When Dennis called the technician, he actually told him to hit the electric motor drive with a shoe. That didn’t help though.

Things were really looking up because of the pure sine wave inverter. Electricity could be run without having to turn on the generator. Dennis was able to install that in several hours without too much difficulty, cuts or bruises. The best addition to the boat though, was the peddling kayak. We bought a Hobie Cat Mirage and it is great for exercise and peddling around in the anchorage. It works like a recumbent bicycle and is a lot of fun.

The weather forecast was actually correct. We had a beautiful Friday evening but by midnight, the wind had shifted and the rain started. At 5 AM, the rain really came down and we discovered some leaks in the boat. At 7:00, we put up the temporary dodger – a green plastic tarp. However, it was very necessary as the boat was getting quite wet inside. By 9:00, we realized that we were dragging our anchor and had to move as we didn’t want to wash up on shore. This took about half an hour and was complicated by the fact that I couldn’t see in front of me. The tarp was in the way but we didn’t want to take it down again as we were planning on waiting out the rain.

While we were messing with the anchor in the wind, rain, and waves, I could see, over in a distant bay, someone waving at us with both arms. I mentioned this to Dennis and he suggested that we turn on the VHF radio. Sure enough, on the emergency channel, was someone calling for help. His anchor must have dragged too, and now he was stuck in the sand. Dennis called over and said he’d be right there. So, he lowered the dinghy and set off for a rescue. I had to guard the boat because we weren’t sure if the anchor had set properly and I would have to do something (I’m not quite sure what) to fix it. 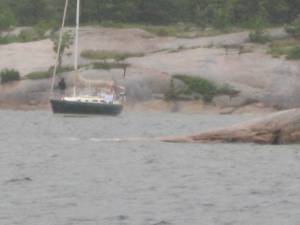 The storm pushed the boat too far into shore

I stayed outside in the pouring rain not only to keep an eye on things, but also to spy on the rescue mission. I could see that Dennis had brought the anchor out further and that the man on board, was winching it like crazy. Nothing helped though. The boat remained in the sand. The coast guard arrived and Dennis started rowing back to our boat. I wondered why he would row when we had a perfectly brand new (one week old) motor for the dinghy. I should have realized that the motor had broken. This is usual for us – Dennis spent many days rowing around on our last trip because of the dinghy motor breaking down. This is why we got a new motor – so he would not have to row. 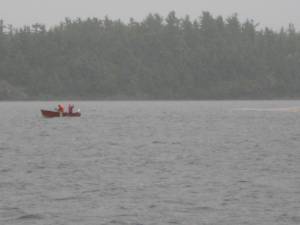 Another boat to the resuce

Eventually, the coast guard was able to set the other boat free and they took off. We decided that we’d head out too and spent a couple of hours driving home in the pouring rain.

Dennis rowing the dinghy back from the rescue