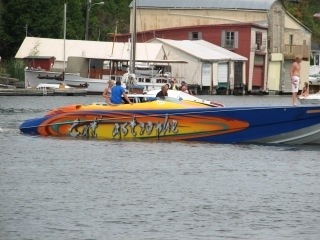 Yesterday, there was a poker run at the marina (whatever that is) and a bunch of big “go fast” boats came in to get their cards. This is a picture of one of them. Interesting boats – very loud and VERY expensive. Quite impressive though.
The Johnny Cash show was excellent and I would highly recommend it. The man’s name is Jim Yorfido and he and the band play the Johnny Cash gig all over the continent. He sounds very much like him and he played all of the hits.
The big thing that happened today was this: 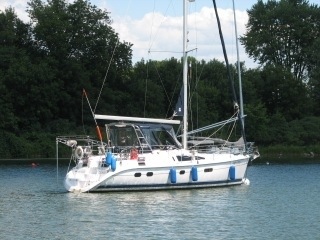 Another 420 Passage – this boat was even built in the same year! So, of course the couple who owned the boat spotted our boat and they came over and had the tour. Then, we went to their boat and toured their boat. Very interesting, similar yet different. Now, they have several things that I would like to have and have already started badgering the captain to get on it!
First of all, they have companionway doors. Here is a link to the company’s website so that you’ll get an idea of what I am talking about. These doors would make life so much easier on the boat and they would keep out the bugs. In addition to this, when the air conditioning is on, we have to put in the hatch boards so when you want to go down into the cabin, you have to keep climbing over them. The companionway doors are so logical!
They also have a solar panel on the davits and I always thought that it would be a nuisance but when we saw their panel, it looked good, worked well and did not get in the way. It also makes a lot of power (80 amps a day for your batteries) which would run the refrigeration for a whole day if you are at anchor. Currently, we have to run the generator for an hour or so a day to keep the fridge going, so this would be very helpful. (Boaters tend to get a little obsessive about generating power, I’ve discovered.)
The most interesting part of our conversation though, was we learned that George and Beth live on their boat from March 15th to November 15th. For the winter months, they housesit. They both work – George at the Pickering nuclear plant and Beth works at the Whitby marina. George put in a heating system for the colder months and also installed a central vacuum system! Very impressive!
We learned a lot from them today and I am glad we met them. (Don’t worry though, I am not going to live in the Parry Sound harbour until mid November!) 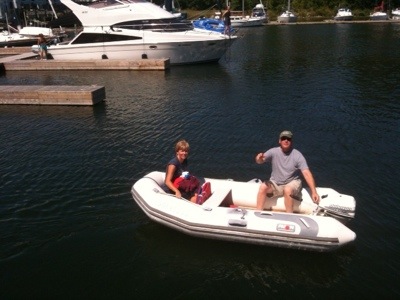 Right now, we are anchored out at Amherst Island and it is beautiful here. The water is excellent! We have gone swimming many times this afternoon and are enjoying the peace and quiet. There were cows getting a drink earlier over on the island.

I thought today was a perfect day but alas, I was wrong. Dennis just emailed some guy in Kingston about a boat (he was looking on Kijiji). The boat costs $125 and is out in a field somewhere. He thinks we should bring it back with us when Nick comes to pick us up in Quebec. I suggested we just tow it behind us now. It may meet with an unfortunate accident though 🙂