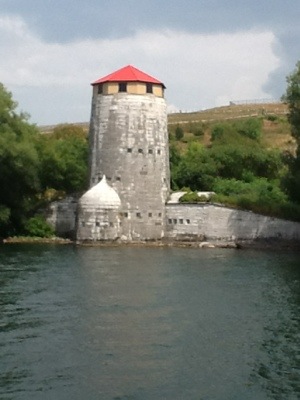 We are anchored out in Navy Bay and the picture above shows what is on our port side. It is part of Fort Henry. On our starboard side, is the Royal Military College, so I think we are well protected from pirates and other unsavory characters! 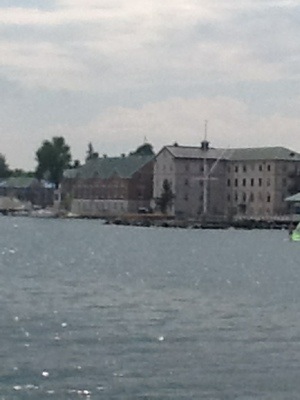 Of course, I am not protected from owning yet another boat. Yesterday, I went shopping in Kingston, and Dennis contacted the Kijiji guy who had the boat for $125. They met on the Split Crow and made the deal. Interesting… This morning though, Dennis thought he’d better take a look at the boat and took the ferry across to Wolfe Island and cycled about 15 km each way to look at this thing. He mentioned that it had a carpet of moss growing inside of it, so I guess he will have a real project on the go for the next winter or so!

Kingston is a great city to visit, especially from where we were located. We were right downtown, so that was a lot of fun. Beautiful old limestone buildings, good restaurants, shopping, buskers, a grocery store and pretty much everything we needed. Of course, we had a bit of trouble getting there. Well, not actually getting there – more like being able to get a spot. The Confederation Basin Marina only takes reservations by either emailing their PDF form or faxing it. They won’t take reservations on the phone and they also require 48 hours notice. Pretty strict, I’d say! It must be because of their excellent location. So, I emailed the form and then called them. The young lady I spoke to said that we could not stay on Tuesday night because they required 48 hours notice (ok – whatever!) but that they would save us a spot for Wednesday. We planned on anchoring on Tuesday but in the morning we called and they suggested that we go to their day dock and get on the waiting list. So we did and then checked in at the office. It was very expensive for having no services at all but we really liked the location. It turns out that most people don’t pay when they go to the day dock but we were completely legal and weren’t going to get kicked off!
The dock was fine – we have our own power and water so it was no big deal (although having air conditioning might have been nice but it was not unbearable). The drawback was getting off the dock. Here is a picture of the only way off! We enjoyed the Quebec contingent of ladies doing this in their good clothes!

Here’s a picture of the boat at the day dock.

I went for a bike ride along the waterfront and found Kingston Penitentiary right in the town. Here are a couple of pictures of it – one from the water as we sailed by and one from the road – the front doors. Not a very nice place.

The rest of Kingston is very nice and it is quite like Halifax in a way with the university, the naval history and the military presence. We really had a good time – I think we might go and see Fort Henry tomorrow. After that, we’ll be checking out the thousand islands.

Posted by JH on August 1, 2012 in Sailing in Lake Ontario