We (as in Dennis) are making preparations to start our trip from Quebec to Nova Scotia. He arrived in Quebec City last Friday (June 15th) and started working on the boat. He said that it was very dirty but that Global Marine did a pretty good job of cleaning it. However, there are several factories and mills right in the area so the debris from that makes things really dirty.

Boat being launched in Quebec

The boat went into the water on Wednesday – there weren’t too many glitches apparently except that Dennis had to dock it by himself. I can’t imagine! When did successfully dock, there were no services (electricity and water) so he was quite disappointed about that and tried to bargain a better deal. No go – I guess his charms don’t work in Quebec – he couldn’t even get a bag of ice! I said that he should be wearing his beret!

Boat being launched in Quebec

So, now that boat is launched and Dennis waiting for me (I will arrive on the 29th and my parents are staying at the house for a couple of weeks and then Phil will stay for the rest of the summer), he is actually POLISHING THE TEAK! I bet it looks nice! I wish we had thought of this before – sending him out as the advance party several weeks before school is out!)

He also installed cockpit doors. Last year in Picton when we met the couple who had the exact boat as us, they had cockpit doors whereas we had nothing on the cockpit entrance except for the original boards. This is fine except when you want to actually go in and out of the boat – you either have to remove them or hoist yourself over them and climb in and out the boat. So, what everyone usually does, is leave the boards off until nighttime when the mosquitoes come out and then once they’re inside, you put the boards in. So, I am very hopeful that this new system will be better!

So, this week, Dennis is getting the boat stocked and will ride around on my bicycle. He may celebrate St. Jean de Baptiste day today and tomorrow. He is basically going to wait around though for me to arrive on Saturday. I am sure he will be well amused, especially now that he has half of the teak polished! He may as well finish the rest! 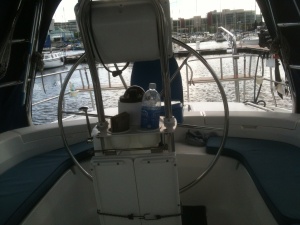 View from the cockpit