June 29th – The Trip to Quebec

I left Parry Sound this morning – drove to Nick’s house in Barrie and got a ride with the Simcoe Airporter Service.

Here is a picture of Nick and my mum and dad – they’ve been visiting for a few days and will stay at the house for another week or so.

I have to say that I really would recommend the Airporter service as it was so nice and relaxing to get to the Toronto airport instead of worrying about the holiday weekend traffic. The dispatcher was constantly giving the driver updates on the traffic so that he could take another route if need be. He was experienced and confident and for $62, it was totally worth it. Just look at the traffic going north! 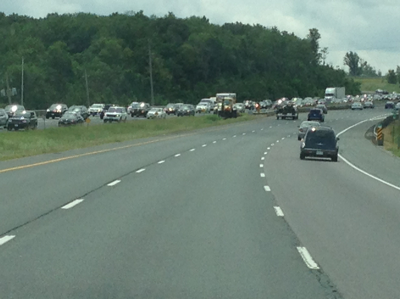 So, I boarded the plane at 3:00 and my seatmate was a second mate of a cargo ship for Algoma Shipping. We discussed quite a few things about the St. Lawence and the Great Lakes.

Thank goodness Dennis was waiting at the Quebec airport as my bag was pretty heavy. He was dressed in fleece and had socks and sandals on (which I quickly adopted because it is so cold here!).

I checked out the boat and certainly would recommend sending someone ahead as the advance party because it looks pretty good! He did a lot of work in the two weeks that he was here alone.

So, we wandered town and saw the sights (dressed in fleece and socks and sandals).  More to come tomorrow.