We decided to stay in Matane for the day because the town is quite nice and everything is close by. I have to say that the biking was fantastic! The town has a designated bike path that takes you to the commercial dock (the one that we toured yesterday when we were too early to go into the marina). After that, the bike path is a paved shoulder on a road that has many pretty little cottages and houses. The road is right on the St. Lawrence River and is very beautiful. I rode my bike for 15 km along the road and then it turns into the main highway. The main highway has an eight foot designated bike lane and there were many, many cyclists out and about. There were groups of keeners as well as regular people of all ages riding. I have to say that I have been more than impressed with the cycling in Quebec. Ontario is so far behind, it is sad.
Here is a picture of a cottage on the route: 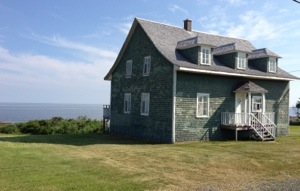 Dennis took the bike out during the afternoon and he went even further. He made it to the next town – St. Ulric.

We bought our first seafood – scallops and shrimp. We were too lazy to walk all the way to the poissoninaire (fish market) so we got our supper at the Metro Plus. They had a good selection but it turned out that we somehow bought shrimp and scallops from Thailand. Oh well, it was tasty done on the barbecue. Next time, we will pay more attention.

Dennis bought at Washburn travelling guitar for the boat. It is quite small but we’ve been having lots of fun with it. We’re getting ready for our debut by practising Song for the Mira, Farewell to Nova Scotia and Sonny’s Dream. We practice way out on the water, so nobody can hear us. Maybe that’s why we’ve haven’t seen any whales lately! 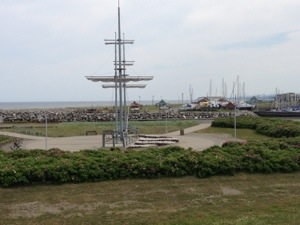 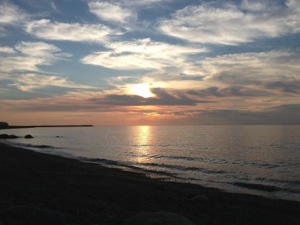 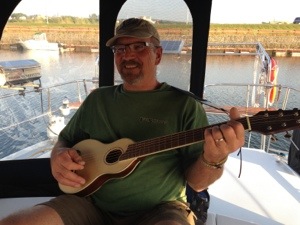