Well! Percé Rock is as impressive as all the guidebooks say, so if you are in the area, you should definitely go and see it!
We set out this morning from Gaspé at 7:00 and had a very nice, lazy sail for a couple of hours. There was not nearly as much wind as predicted, so it was quite calm. We turned the corner and could soon see Percé Rock from a long way away. It took an hour or so to come up to it. Pretty cool! 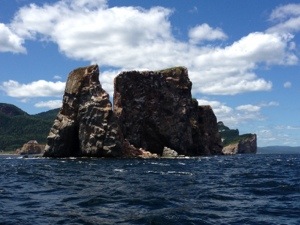 Here is a website with some excellent pictures.
http://www.travelet.com/2009/05/discovering-the-wonders-of-perce-rock-canada/

After we passed the rock, we headed toward L’Anse-à-Beaufils. Suddenly, we were in some turbulent water and had a few good smashes around, but this quickly subsided and we made it safely to the entrance of the harbour.
The marina was not answering the radio, so we weren’t sure where to go. We could see this man waving and asking us a question. We had no idea what he was saying. Dennis finally figured out that he was asking us how deep the boat was. Another man from across the harbour called back to him and said that it was probably five feet. (We learned all this later as the conversation took place in French!)
We made a very dramatic entry onto the dock – the wind had picked up considerably and Dennis had a hard time controlling the boat. We now have a lovely scratch along the left side (which matches with the scratch on the right side that I did last year). At any rate, we managed to tie the boat up without any other damage.

I rode by bike back to Percé to see the town (along the very nice paved shoulder) and the rock from up close. The town looks like a lot of fun so we are going back tomorrow to check it out. Very touristy but there looks like there is a lot to do.

Here is of picture of Percé Rock from land: 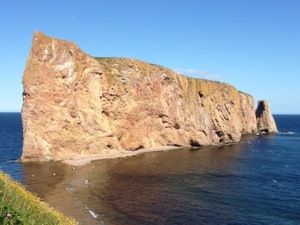 This is a picture looking in the opposite direction of Percé Rock – it is also very beautiful.

Here is a picture of the area right across from the marina – this is where we had supper. 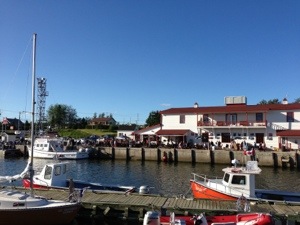 On the way back, we spotted Dennis’ dreamboat, complete with a hole… 🙂

For those who are planning on traveling here by boat, you should bring cash to pay for many of the marinas as quite a few don’t have debit machines. Also, if you’re planning on loading up with groceries, don’t go to Percé – it is geared for tourists. Gaspé has two good grocery stores within walking distance.

More info to follow tomorrow. We are going to go to Île Bonaventure via a tour boat and check out the thousands of birds that nest there.