So, here we are in Pictou – a very pretty town with lots to do. We did some shopping this morning and moved the boat around so that we could reach the power and water. Our cord and hose is really far away from the utility box, but it is very nice to have amenities such as lots of running water and electricity. I don’t think I’d have lasted on the Hector! The Hector is a ship that brought the first Scottish settlers to Pictou and the passengers endured many hardships while crossing.

Pictou has a museum and a replica ship of the Hector and we explored that this afternoon. It was very worthwhile and the displays were excellent. 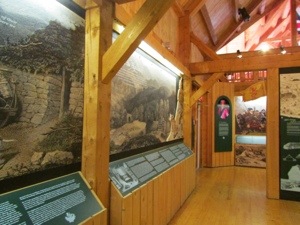 The crossing over from Scotland to Nova Scotia on the Hector must have been terrible. First of all, the ship left bout a month late. The first part of the journey went well but at about three quarters of the way across the Atlantic, the ship met a heavy gale and pushed them back about two weeks sailing so the whole voyage took 12 weeks.

This is what I read today about the trip:
“Little did they know that John Pagan had not loaded any provisions for their first year in Pictou, nor had he loaded even sufficient food to last the long voyage. No one could foresee the terrible storm that would blow the Hector so far off her course, nor the disease that would run rampant through the emigrants crowded into her hold. While the rations were considered plentiful enough at first, the passengers complained about the moulding oatcakes and would throw them, half eaten, into the scuppers of the ship. Hugh MacLeod would gather up these discarded scraps and keep them in a bag, possibly sensing that in the days to come, they would be sorely needed as food…Eighteen of the children died, and were committed to the deep amidst such anguish and heart-rendering agony as only a Highlander can understand. Their stock of provisions became almost exhausted, the water became scarce and bad; the remnant of provisions left consisted of mainly salt meat,which, from the scarcity of water, added greatly to their sufferings.”

Here are a couple of pictures of the replica ship:

So, it was a very good museum to go to and I would highly recommend it.

Here are a couple of pictures of one the original Pictou buildings – apparently it is the only building in Canada that has a window in the chimney.

Dennis got a good shot of an unusual homemade boat:

And, the final picture today, is of course, yours truly – he was in his glory!

Posted by JH on August 15, 2013 in Sailing in the Northumberland Strait