It is way too windy to leave today – gusts up to 40 km, so we are staying put. Tomorrow looks better, especially if we leave early.
Yesterday (July 10th), we checked out Rimouski. We did the grocery shopping (it is within walking distance) and then Dennis borrowed a bike from the marina so that we could go and see the museum and submarine (decommissioned from the Canadian Navy).
The Onondaga was one of the three submarines in the Canadian Navy. Since it was being “mothballed”, Rimouski bought it for $4.00 in 2006 and set it up as a tourist attraction. We toured it and used their audio devices to learn the details. It is very cramped inside. There were sometimes 70 men living on the submarine and each enlisted man was allowed 20 seconds of fresh water a day for a shower! The officers had slightly better conditions (but not much!)
Here are some pictures of the submarine. Notice that one of the bunks is right beside the torpedoes. (That bunk was reserved for the youngest guy!). 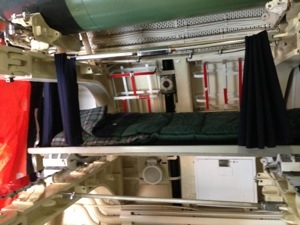 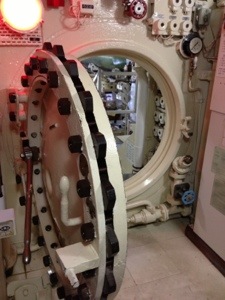 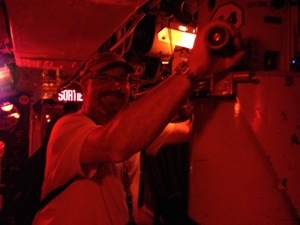 After the tour of the submarine, we checked out the Maritime museum which featured the sinking of a luxury ocean liner in 1914. 1012 people drowned. The ship, the Empress of Ireland, sunk of the coast of Rimouski (Pointe-au-Père). After the sinking of the Titanic, the shipping companies were required to have enough lifeboats for everyone one board and the crew had to practice their safety drills every morning. But, another ship hit it on the side which created a big hole that quickly filled up with water. The ship listed to one side at a 60 degree angle, so very few of the lifeboats were able to be accessed. The third class passengers were trapped down in the bottom of the boat.
This disaster is not well known because shortly after it occurred, WW1 started and the disaster was forgotten about.
The museum was excellent and the most fun part was the movie. We went into the theatre and an old film was showing on the screen. It was in black and white and very scratchy. It turned out to be filming us, with a ten second delay. Dennis, of course, waved his arms around and basically made a fool of himself, but we all had a good laugh. The real film was excellent (it was about the Empress of Ireland) and was almost interactive. At times, the theatre got quite cold with wind blowing on us to depict the passengers on deck. Then, it showed the coal furnace being stoked and the theatre suddenly glowed red and got warm. It was very well done!

After the museum, I went shopping at the mall and then not much happened after that except for the wind picking up to 35 knots an hour! So, this is why we are staying an extra day in the marina. Some boats have ventured out but most are staying put.

While in Tadoussac, Dennis bought what he thought was blueberry jam. He tried it on his toast and it turned out to be some sort of Quebec blueberry onion relish. So, if anyone comes to Quebec, there is no need to buy that!