Well, we finally got the Split Crow launched last week and on the weekend, we had our shakedown cruise. Saturday was beyond pathetic, as we only motored into Parry Sound. We had a few challenges though, one of them being the auto-pilot but after Dennis smashed a few things down in the engine room and made a bunch of noise, the auto-pilot learned the error of its ways and cooperated fully!

We stayed at Big Sound Marina for the night and docked successfully, even rather easily. Dennis backed in and I took a picture of this momentous occasion! Jim, of Somewhere, would have been proud because he backs in everywhere except Killarney!

Backing in at BIg Sound Marina

We headed uptown and went to the various banks and liquor store – Dennis was stocking up for Jim, who likes dark beer. We also found the bargain of the century and bought three rubber backed mats – they’re beautiful and perfect for the Split Crow – I am going to go back to the store tomorrow (by car – how mundane) and get a couple more for the aft cabin if I can find the right colour.

We went swimming and ordered a pizza for supper, and then took a walk to the town dock and got invited onto Still Watch – this is a 104 foot privately owned project boat. It was pretty cool and we enjoyed our tour. I guess our summer of boat touring has officially begun! 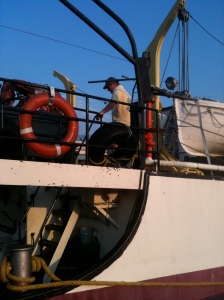 We actually went into Parry Sound so that we could fill our water tanks with good water. While we did so, we also took advantage of having almost nobody in the marina as you can see by us “hogging” the dock with the dinghy!

Dinghy on the dock at Big Sound Marina

The next morning, we moved over to the Town Dock, partially to get away from the hungover boaters who were coughing and hacking (obviously shouldn’t smoke) but also to plug in the electrical. We had to do some cleanup and it is much easier to run the electricity than it is to run the generator, plus I needed some practice docking the boat (it went ok – nothing like Dennis’ spectacular docking the previous day though). 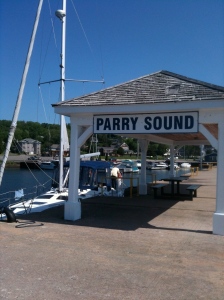 Split Crow at the Town Dock

We spent a couple of hours at the town dock and then headed over to Killbear for lunch. We actually sailed most of the way. You can see our track on this link.

In all, we had a lot of fun! The weather was good, the water was cold, but we had lots of laughs!