We arrived in Sault Ste. Marie after an extremely long ride down the St. Mary’s River. It seemed to take us forever! We left our anchorage at 6:30 and got in at 3:00. Didn’t see anything exciting except for an osprey. 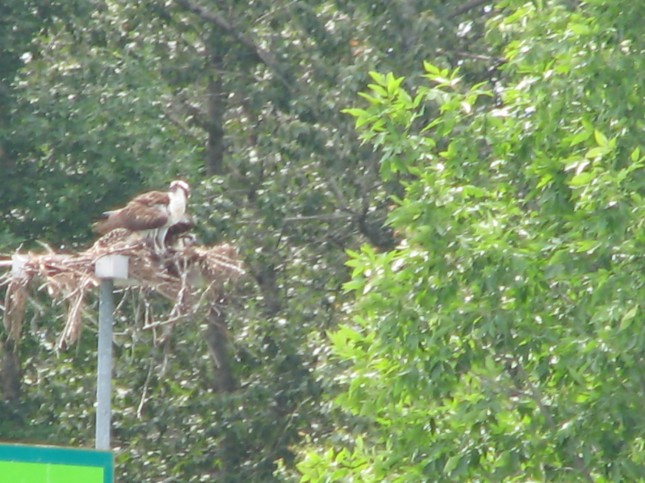 An osprey along the St. Mary's River

The ride down the St. Mary’s was uneventful. We passed four freighters with no problem. One blasted his horn at the little fishing boats that were right in the channel, and at the last minute (or so it seemed to me), they moved!

One of the freighters that passed us in the St. Mary's River

We finally met up with our friends, Nancy and Steve Rouble and it was great to see them! They are being very good about collecting our various parcels – the wind meter, the peddles for the kayak and some sort of plug for the engine that Dennis needs. Hopefully all these things will have arrived by the time we get back from Lake Superior.

This morning, Dennis got up early and was one of the first people to arrive at the Farmer’s Market. Good thing too as he practically cleaned out the entire supply of Finnish Coffee Bread. We’ve already eaten most of the first loaf.

When I finally got up, we went back to the market and got some fresh vegetables and a few other things. Tomorrow though, we will have to go to a real grocery store and make sure that we have enough food for ten days. Apparently, there are not a lot of places to stop in Lake Superior – lots of anchorages but not too many marinas.

Dennis met up with a couple who have sailed the entire east coast – Nova Scotia, PEI, Newfoundland and even Forteau, Labrador! They heard a strange sound though one night in the Straits of Belle Isle (that is between the west coast of Newfoundland and Labrador) and it was ice floes hitting their boat. They decided that they should move southward. They are also going to Lake Superior.

We will probably stay here for a couple of days and then if the weather cooperates, we will go to the locks on Monday.