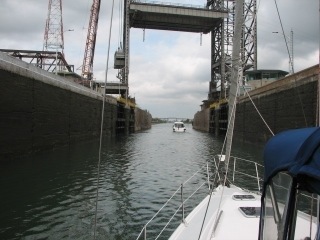 Here is a picture of our last lock! We are now free to float out to the Atlantic if we want (maybe next year…).
When we woke up this morning, I checked on the horses and they were still down by the river. They weren’t tied up so who knows why they were still there.
We left at 8:00 and did the last two locks without any problems. 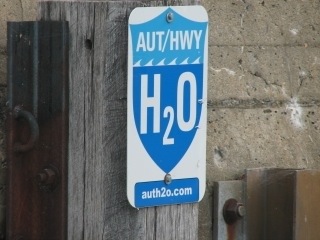 I thought that I had better include the highway sign as we won’t see that again!
The last 15 kilometres or so to Montreal is actually a canal so that the Lachine rapids can be avoided. You can’t see much though, just glimpses of the skyline so when we rounded the corner and approached Ile Saint-Helene, we got our first good look. 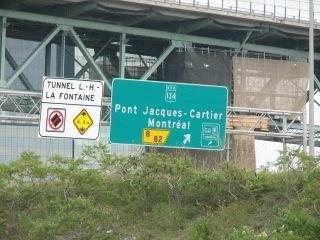 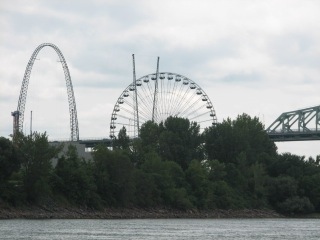 The most exciting part of the day was when we went past the island and went on the other side of it to get to the marina. The current was very strong and our progress slowed considerably. Dennis had the engine almost wide open and we were only doing 2 knots (we would usually be doing 6-7). It seemed like it would take forever to get to the marina! The water was very turbulent and I was worried that we would be pushed around. The Split Crow made it though and as we passed the monument to sailors (of all things!), the current stopped and we eased into old Montreal. 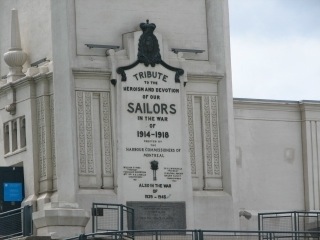 We called Port d’Escale on the radio and the lady told us to put our fenders on our port side. They were already rigged for starboard so Dennis had to go and change them as well as the lines. We spotted the attendant and he pointed out the slip. We could see that we needed to switch everything to the starboard side, so while I did circles in the marina, Dennis switched the fenders and lines again (he was not pleased!).
We eventually got tied up without too much trouble and spent the afternoon wandering around old Montreal. What a difference from Toronto! Lots of shops, restaurants, entertainment, street vendors and horses right at our doorstep. We sampled poutine (ha!) and tonight we are going down rue St. Catherine for supper. So far, so good! 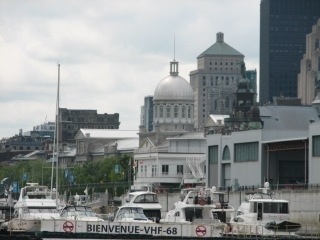 One response to “August 11 – Montreal”