Well! We finally were able to leave the “Maggie” Islands (as the PEI marina manger calls them) this morning. Dennis woke up at 4:15 and saw that it was as clear as a bell (yesterday was very foggy until 11:00). By 4:30, the fog rolled in and we could hardly see but Dennis and George were confident that it would clear shortly. (Either that or they really wanted to get off the island!).

So at 5:30, we set off and the fog lifted shortly thereafter.

We said goodbye to our friends from the Wyvern III (sadly the ex Navy boys won our last euchre game). Here are a couple of pictures of them leaving: 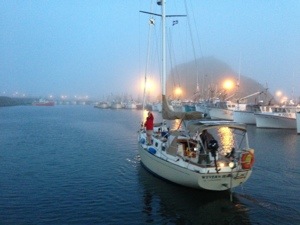 I took a picture of the Magdalen Islands as we left. 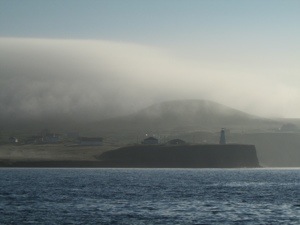 As we wandered around the marina, Dennis found his dream boat – a 53 foot Bruce Roberts. Guess who’s going to look at it tomorrow? 🙂

The day was uneventful – we motored the whole way and got in to Souris, PEI at 5:00. 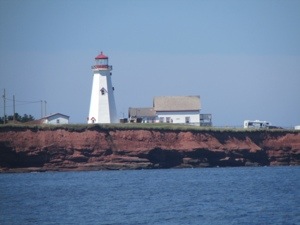