So, today was fairly interesting. We went for a hike up the mountain at Covered Portage Cove. Here are a couple of pictures – an overturned tree and the view from the top. 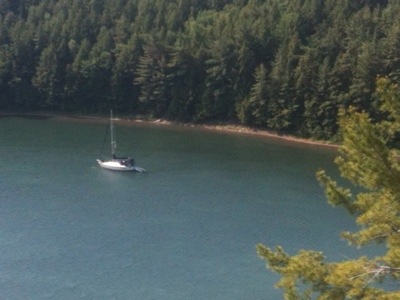 There was only one other boat in the anchorage, so it was very nice and quiet. As for the hike, well, it only took about 15 minutes to walk up the mountain (maybe I shouldn’t even call it a mountain). The view is amazing though because you can see all of the North Channel in one direction and Killarney in the other.

We decided to head out to Hayward Island because of the strong wind warning. It is much better protected than Covered Portage Cove. On our way there, in the Landsdown channel, we spotted a small powerboat on the side of the channel and he flagged us down. So, we went over to see what that was about and the boat had stopped working. They were headed towards Killarney but asked for a tow. They had called their marina for a tow but the mechanic had left for a while. We towed them towards McGregor Bay – Dennis actually put the sail up for a while. After about half an hour, the marina called and the mechanic came to tow the boat back. There were actually eight people in the boat and it was one couple’s anniversary. If you check on the Spot, you can see our strange route – and that is why. 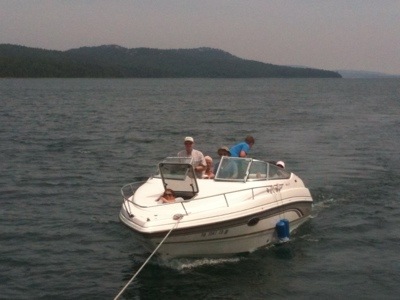 We then headed over to Haywood and within a minute of putting the dinghy into the water, we had a new friend. Dennis can’t afford a parrot, so I guess we’re stuck with the seagull. 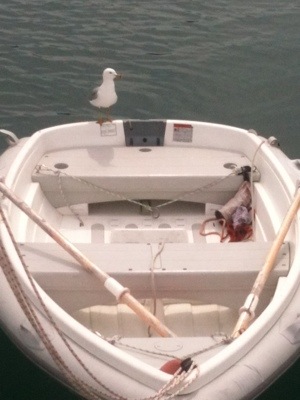 That’s all that is happening today. Dennis has killed about 20 giant horseflies. They keep buzzing around but won’t land.
Nick texted me from home and told me that pike that was over three feet long, got his lure last night so he was going fishing today to try to get his lure back. I haven’t heard back from him, so I suspect he has not been successful. Imagine though – a fish that big – in our little lake!

Heading back to Killarney tomorrow and back to work for Monday.